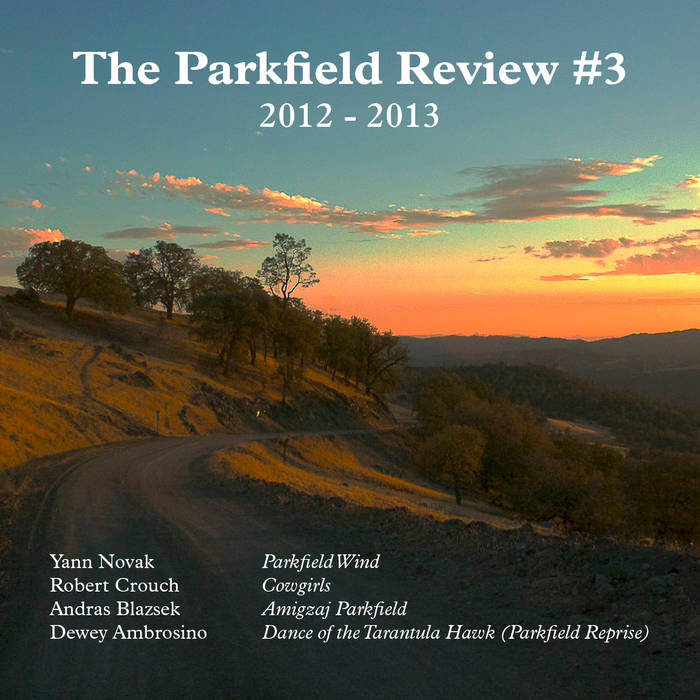 Track 1, Yann Novak, Parkfield Wind
A raw field recording of the wind taken during the trip to Parkfield.

Track 3, Andras Blazsek, Amigzaj Parkfield
Amigzaj Parkfield has been developed from the cross-breeding of two genetically different children. The kid of an astronomer grown out from flowers; the California sun baked these flowers until they lost all of the water from their bodies. During the day these corpses were moving from one pot to another. The kid of an engineer brought his equipment to measure the land of the tarantula. From the measurements he was trying to analyze the patterns of the landscapes around the tarantula. During the time of the Parkield experiment the fragile measurements of the engineer kid and the astronomer kid overlapped and formed a new pattern on the landscape.

Track 4, Dewey Ambrosino, Dance of the Tarantula Hawk (Parkfield Reprise)
Dance of the Tarantula Hawk (Parkfield Reprise) is a 9:08 min long sound work that started with collaborative field recordings made by Hungarian artist Andras Blasek and myself on site at the Parkfield retreat location. The title comes from a nighttime event where we witnessed a tarantula hawk wasp dragging a tarantula over a long distance into its underground lair. The field recordings were made with seed pods, found on site, that had a remarkable sound quality. They were collected and then recorded being manipulated sometimes by the wind, sometimes by hand. The recordings were then dragged into my postproduction lair where I administered multiple electronic treatments. I then layered them with a previous experimental electronic recording that was composed visually, using a cymatic phenomena sound system that was controlled digitally through a frequency modulation based synthesizer patch made with Pure Data programming language.

The attempt was to produce a sound piece that first captured and evidenced some audio intrigue about a place that was originally cued by a visual stimulus. Second, like the mind manipulates its surroundings, the content was then manipulated and treated in the lair (studio, domestic environment) and finally placed side by side with another audio experience that was generated through visual means. This attempt is like an audio matrix of memory that can sometimes accrue or aggregate and then produces insight in the exploration and discovery with sound.

Bandcamp Daily  your guide to the world of Bandcamp

Serena Cherry debuts her black metal project, plus a Pick from the Crypt block from Svalbard